CEA is the traditional operation for carotid stenosis (symptomatic and >50%, or asymptomatic > 80%). However, starting in 2009, endovascular approaches entered the scene (Fig 1 from JAMA). These were performed using a transfemoral approach. Note that stenting was not a slam dunk. Even though it is less invasive, patients can have significant complications. 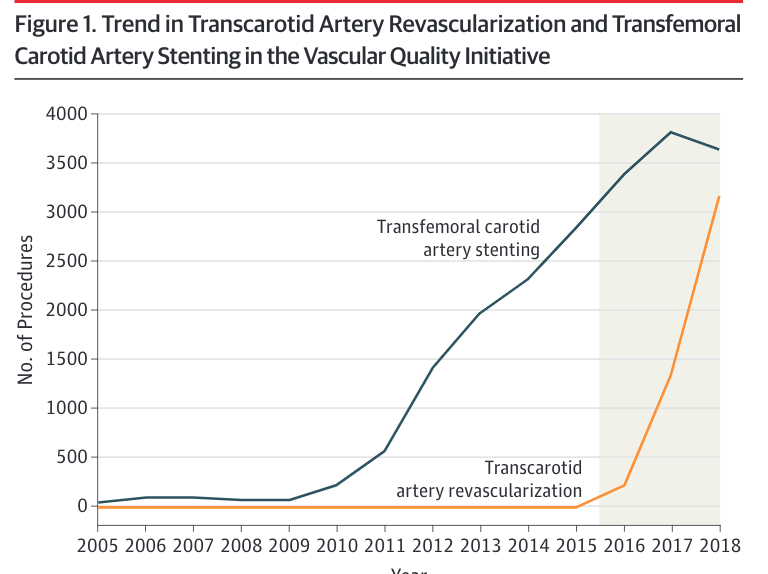 In 2015 a new endovascular procedure called “TCAR” entered the landscape aiming to reduce the stroke and death risk associated with transfemoral stenting. TCAR stands for trans-carotid arterial revascularization. The device is sold by Silk Road Bio and it has two key properties.

TCAR was initially validated by a group of expert physicians on a group of 141 patients in the ROADSTER I trial. Their findings were encouraging. Out of this group, only 2 people developed strokes, 2 died, and 1 developed an MI. The ROADSTER II study sough to explore whether a broader group of physicians could achieve similar success rates. In this study, they evaluated approx 700 patients at 43 centers. 70% of the physicians were new to the TCAR approach. They underwent training but were not TCAR experts a priori. Additionally, all patients had at least one risk factor that made them poor candidates for a CEA, such as a lesion that was high in the neck, restenosis after prior CEA, prior neck irradiation. They could also have medical comorbidities such as old age (assuming they mean frailty), CAD, cardiac dysfunction, pulmonary dz.

In this relatively challenging group, the researchers found a stroke/death rate of 2.3%, s/d/mi rate of 3.2% (these results are from the intention-to-treat group). However, not all of the patients were adherent to the treatment protocol. About 40 did not take asa/plavix and a statin. So if we exclude this group and look at the patients who followed the protocol, the result was terrific:

Stroke/Death of 0.8% and Stroke death/mi of 1.7% at 30 days. At first glance, these numbers look better than any of the numbers mentioned before.  which is better?? than CEA

The authors qualify these findings, pointing out that we need longer than 30 day follow up and really ought to do a head-to-head comparison between TCAR and other procedures (such as transfemoral stenting or CEA) as this is a single-arm study, which I agree with.

Additionally, they mentioned one thing about ischemia which I was wondering about. In TCAR the blood flow is reversed. Could reversing the flow result in some type of ischemia/shunt? I am thinking about patients who have an aberrant circle of willis.

However, the authors mention that while doing a CEA all the blood flow through that artery is restricted (because it’s clamped during the procedure). They also mention an EEG study of patients undergoing TCAR showing that only 1 in 81 had EEG changes during the procedure study of that showed only 1 in 81 patients had EEG changes, which responded to BP elevation. Additionally, they say the time for the procedure is 13 minutes, which is a lot faster than CEAs, I think. Moreover, the clamping in CEA is associated with ischemia in 10-15% of ppl?*

*At first I was impressed by this point, but now that I’m thinking about it, it seems to contradict the stroke rate statistics in CEA.

I didn’t know a lot about TCAR before reading this paper. I’m enthusiastic to see in in practice. I’d like to see a study comparing TCAR to CEA.